”We liked the overall impression of Open District Heating™ in terms of the financial, environmental and technological benefits it offers.”
Gustav Bergquist, Chief Technology Officer, Bahnhof

Below the Vita Bergen park in Södermalm in Stockholm, the internet supplier Bahnhof has transformed an old rock cavity into a futuristic data centre, Bahnhof Pionen. The space now houses row upon row of cabinets, filled with computer equipment put there by Bahnhof’s customers. And the cabinets are heated up.

With increasingly densely packed and powerful hardware, a modern data centre becomes very energy intensive and the cooling system has to be dimensioned to handle this. When Bahnhof took over Pionen in 2007 and rebuilt the rock cavity into a data centre, conventional cooling equipment was installed.

The excess heat from the cooling plant facility was carried away by fans and released into the air outside the door to Pionen, where a characteristic plume of steam revealed that the business inside was wasting heat.

But already from the start, Bahnhof was thinking about doing something better with the surplus heat. There was enough surplus to provide heating to hundreds of apartments and Pionen is located in one of Sweden’s most densely populated areas, in Södermalm in Stockholm.

So why not re-use the energy? At the same time, Stockholm Exergi was looking for pilots for its project Open District Heating®, which gives companies an opportunity to sell their surplus heat to the city’s district heating network.

The amount of compensation that Stockholm Exergi pays Bahnhof for the supplied heat depends on the outdoor temperature. On a cold winter’s day one megawatt hour can be worth ten times as much as on an ordinary summer’s day. Bahnhof still knows that it has made a good investment.

Bahnhof has deliberately chosen to locate its server halls in central locations. Primarily because it enables the company to be close to its customers. But the sale of excess heat via Open District Heating® has also resulted in a new way of looking at the financial aspect which strongly supports Bahnhof’s strategy. Bahnhof believes that the financial conditions for IT operations will change substantially thanks to the opportunity to sell energy.

Sustainability aspects are also becoming increasingly important. Today customers of the IT companies demand that suppliers ensure that their production is sustainable and adapted to the environment, which gives Bahnhof yet another clear competitive advantage.

”We are talking about a new business model that makes it more financially viable to build a data centre near a district heating network than on a site where land is cheap.”
Gustav Bergquist, Chief Technology Officer, Bahnhof 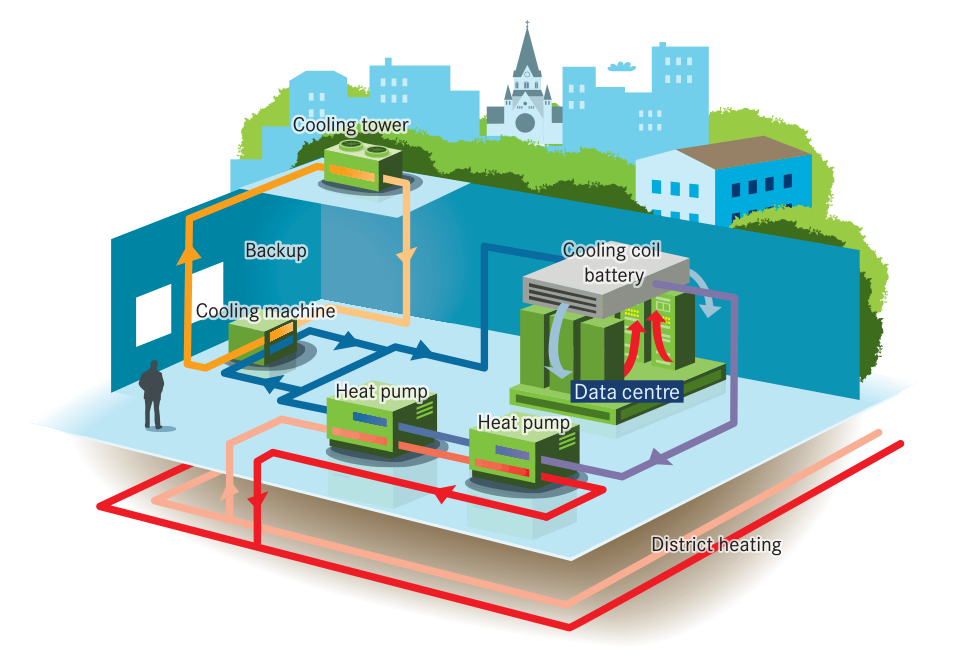 “Closing the Loop” with heat recovery

Do you also want to become a Open District Heating supplier?