”The fact that we are based in the city means we are close to district heating and district cooling networks, which has opened for a new way of thinking about cooling, sustainability and solutions that are unbeatable financially.”
Gustaf Bergquist, Chief Technology Officer, Bahnhof

The Internet supplier Bahnhof’s Thule facility in central Stockholm is probably Sweden’s most energy-efficient data centre. With a cooling system that has been linked both to Stockholm Exergi’s district heating network and district cooling network, Bahnhof has created a technical solution that combines financial benefit with sustainability and very high operational reliability. The excess heat is recovered. At the same time the facility’s excess cooling capacity is used to meet the needs of other district cooling customers whenever Thule does not need the capacity.

Bahnhof Thule’s premises were initially built to house the insurance company Skandia’s data centre. The place is the same, but the circumstances have changed a lot. The new data centre requires far more energy than the facility that previously occupied the premises. Thule comprises three separate halls that have been built with energy efficiency and recovery as primary considerations.

Bahnhof has taken a conscious decision to build up expertise on how to design and build data centres, based on several new ideas concerning IT operations. One philosophy that is unusual in the industry is that Bahnhof likes to be close to its customers physically, with facilities in central locations in the middle of the city.

The heart of the cooling system at Thule is three heat pumps which are connected in series both on the cold and warm side. During normal operation the heat pumps produce both district heating and district cooling at the same time.

The Thule facility has been dimensioned to take into account the long-term maximum need for cooling from the start. But the heat pumps can nevertheless be fully utilized from day one as the surpuls capacity can be used for supplying cooling to the district cooling network. As the centres fill up with new customers and more equipment adds to the heat load, an ever increasing part of capacity will be used by Thule itself.

”Because the data centre will be expanded in coming years, it was important to Bahnhof to invest in a system solution for both cooling and recovery of excess heat that is sustainable in the long term.”
Jan Lindfors, Stockholm Exergi 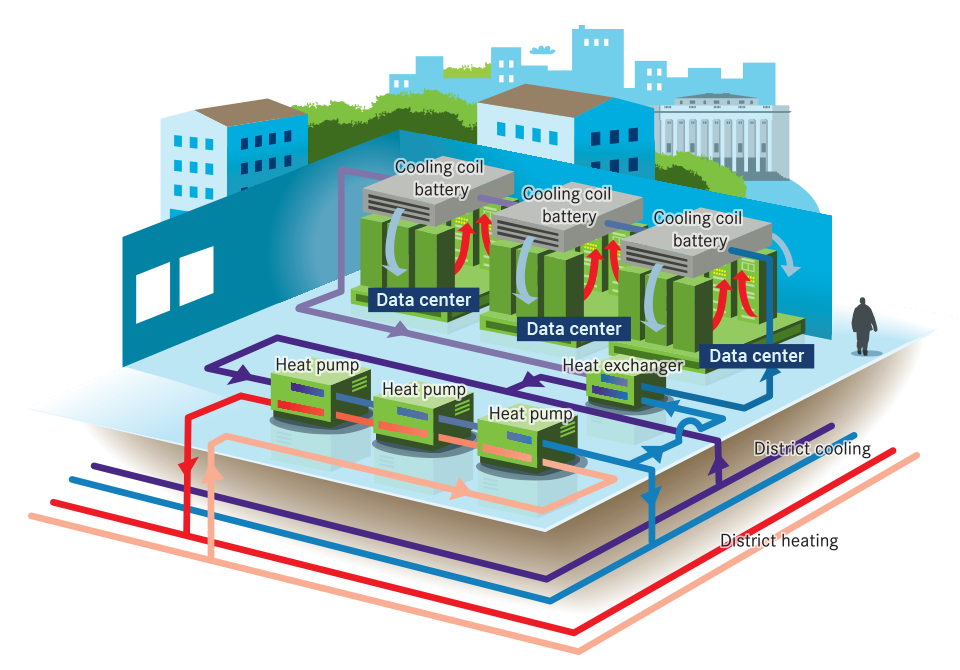 Cost-efficient cooling and heat recovery as a Service